Tokyo, a top-tier World City, is recognized as a large population centre of global influence, ranging from international finance and business to innovation and pop culture. Fairly little, however, has so far been reported on its status as a public cycling hub. After all, bicycles are noticeably incorporated into Tokyoites’ daily routines, highlighting their social acceptance and their remarkable integration into the megacity’s transportation network.

According to the latest official government figures, in Tokyo prefecture (Tokyo-to) more than 13 per cent of employed residents choose the bicycle as the sole mode of transportation when commuting to work, notwithstanding the presence of an expansive and exceptionally reliable public transport system in much of this large municipality. Compared with other metropolises of similar global influence and modernity, that is, other top-tier World Cities, Tokyo clearly tops the list in public cycling popularity (for more information on World Cities, please read ‘The sporting clout of prime World Cities’). 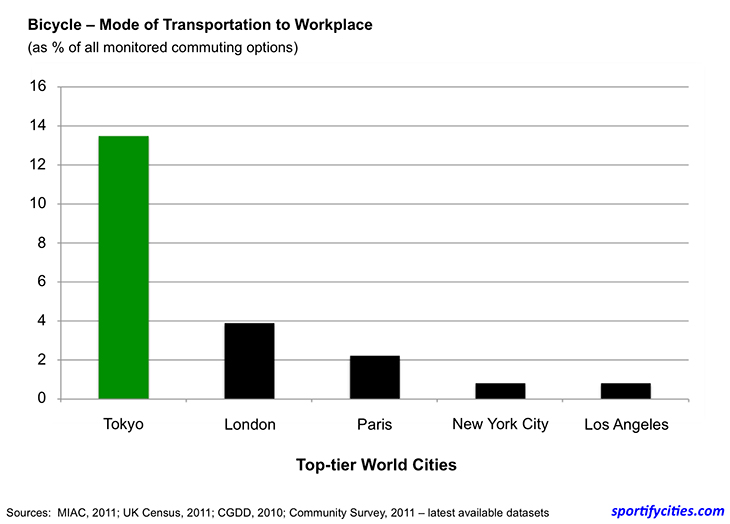 Tokyo demonstrates the highest share of commuters who cycle to work, clearly outperforming the other top-tier World Cities. Such assessment of bicycle commuting shares allows for reliable comparison with various cities, highlighting it as a valid indicator of public cycling popularity in any given city.

As illustrated in the graph above, Tokyo reaches, by far, the highest share of bicycle commuting (13.5%), consolidating its comfortable lead over the second placed London (3.9%) and third placed Paris (2.2%). Both European cities reveal respectable, but not outstanding, levels of public cycling popularity, virtually defusing the media-driven bicycle hype surrounding these two cities. The stubbornly low bicycle commuting shares of less than one per cent in the U.S. cities of New York City and Los Angeles could be a clear indicator that commuters living in these low-density North-American megacities regard the bicycle a rather inconvenient mode of transport; in this regard, the cities’ land-use planning and zoning laws are likely to be the key obstacles to public cycling.

Although caution needs to be exercised when attempting to make any inter-city comparisons on urban transportation, the most reliable and suitable approach to evaluating public cycling popularity in the top-tier World Cities appears to be the occasionally conducted survey on transportation mode choice to workplace – i.e., quantifying the levels of bicycle commuting among employed city-dwellers. 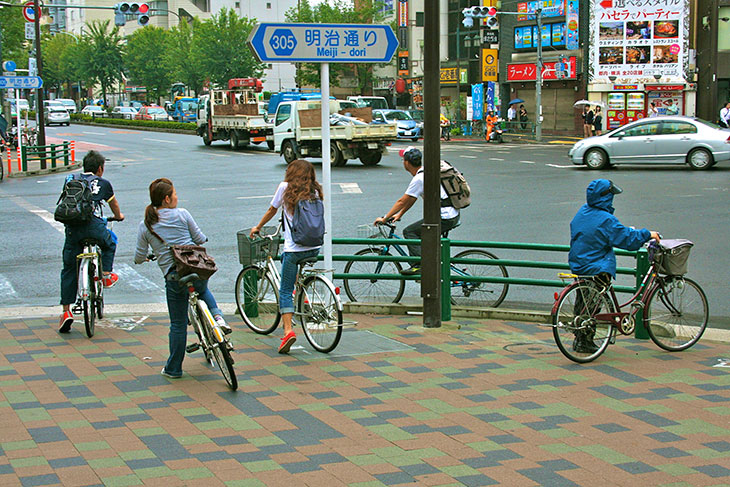 In Tokyo public cycling is an ordinary urban activity that has emerged without any top-down indoctrination – that is, there is no evidence that costly and pervasive pro-bicycle public campaigns have enabled the creation of this impressive public cycling culture. 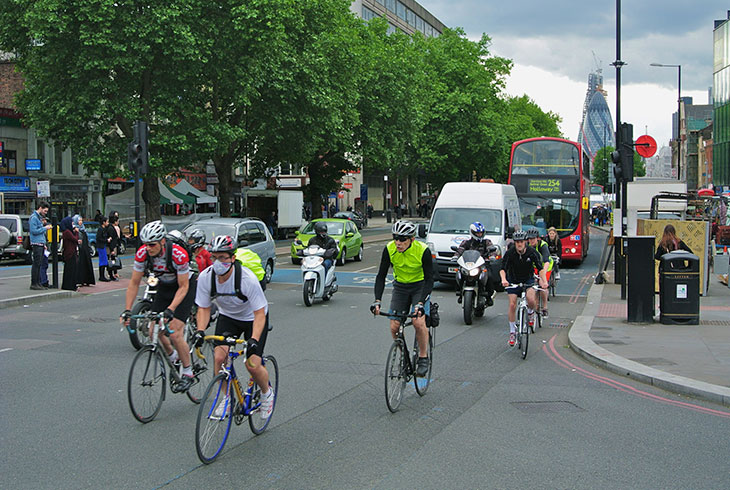 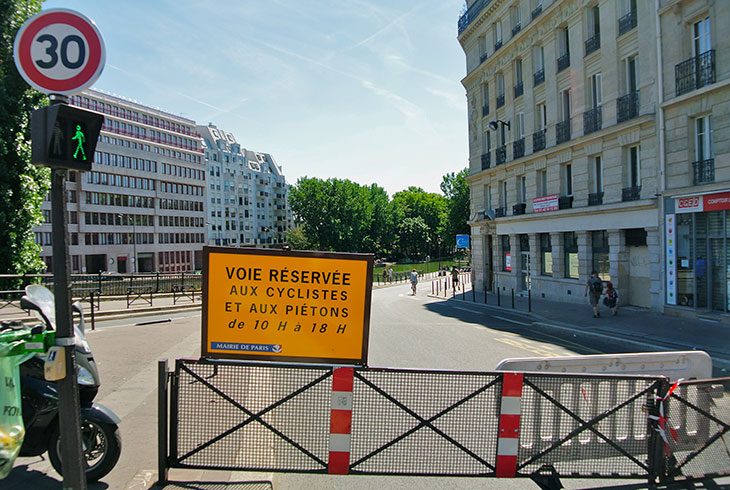 ‘Paris Respire’: on Sundays selected districts of Paris are closed to motorised traffic. While it is designed to improve the city’s liveability status in international city rankings (and, of course, to boost the profitability of small businesses within the designated zones), there is scant measurable evidence that this concept has resulted in increased popularity levels of public cycling.

Based on these available figures on bicycle commuting, the graph clearly demonstrates that among the top-tier World Cities – the dominant population centres in the developed world – only Tokyo seems to have excelled at integrating this healthy and environmentally friendly transportation mode into its urban life. Since top-tier World Cities regularly serve as models and sources of inspiration for other cities, these influential population centres can be considered the geographic points of reference for long-lasting trends, possessing a tremendous capacity to shape the view of what urban living will look like in the 21st century (as argued in ‘The sporting clout of prime World Cities’). In short, their global impact must not be underestimated.

Thus it is reasonable to suggest that Tokyo’s impressive public cycling culture could potentially symbolise a ‘Future City’, inspiring other cities to put greater emphasis on reducing carbon emissions, diversifying their urban transport systems and promoting healthy urban lifestyle. Before assessing the feasibility of such a World City soft power effect, however, this special report will identify and evaluate the conditions that laid the foundation for Tokyo’s successful public cycling culture (for further reading, see the chapters ‘A favourable urban spatial structure’ and ‘Bicycle infrastructure – Tokyo’s unconventional path’).

In Tokyo the bicycle commuting share of 13.5% is rather unequally distributed across its core urban area, the so-called 23 Special Wards – the most populous part of the Tokyo prefecture in which 9.2 million of the 13.2 million residents live. The latest official data reveal that the lowest bicycle commuting rates among employed Tokyoites are observed in the city’s central wards: merely 5.5 per cent in the Minato ward, for instance. In contrast, in the north-eastern and southern wards one in five to six commuters prefers to cycle to workplace – as illustrated in the chart below, with nearly 20 per cent the Adachi ward shows the highest proportion of bicycle commuters among the 23 Special Wards. 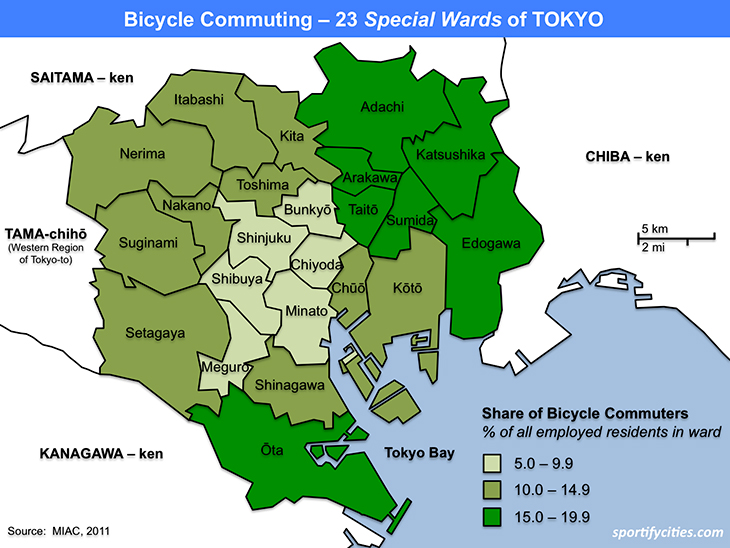 Across Tokyo’s 23 Special Wards the percentage of employed residents who use a bicycle as the sole mode of transportation in order to get to their workplace ranges between 5.5% and 19.5%.

Apart from choosing the bicycle as the sole means of transport to workplace (i.e., 13.5%), 5.2% of employed Tokyoites also uses it as an additional transportation mode in order to get to or from nearby train stations – ranging from 1.4 per cent in the inner-city Chiyoda ward to 7.1 per cent in the outer Edogawa ward. (Due to Tokyo’s car-restrictive policies, such as limited and costly car park space near train stations, the percentage of workers who use private cars to get to the nearest train station is merely 0.2 to 0.6% across the Special Wards).

A statistically significant correlation (r = .80, p < 0.05) between the proportion of commuters using a bike as a sole mode of transport and those who use it as an additional transport option in any given ward implies that bicycles are generally used more keenly in the outer wards rather than in the central wards. And especially in these outer wards many young and middle aged adults as well as pensioners also appear to be using bicycles for short-distance trips to shops, leisure facilities, to name a few destinations, suggesting that the popularity of bicycles is not confined to work-related trips only. However, there is no clear evidence that could validate this hypothetical indicator, as national surveys on transportation mode choice solely capture the trips to workplace among employed city-dwellers.

Yet despite the lack of official information on the volume of non-work-related bike trips and age distribution of local public cyclists, the available data on bicycle commuting shares as well as the anecdotal evidence on the ground may give reason to suggest that public cycling is deeply embedded in Tokyo’s everyday life; that is, public cycling has unarguably turned into a socio-cultural habit for many Tokyoites. 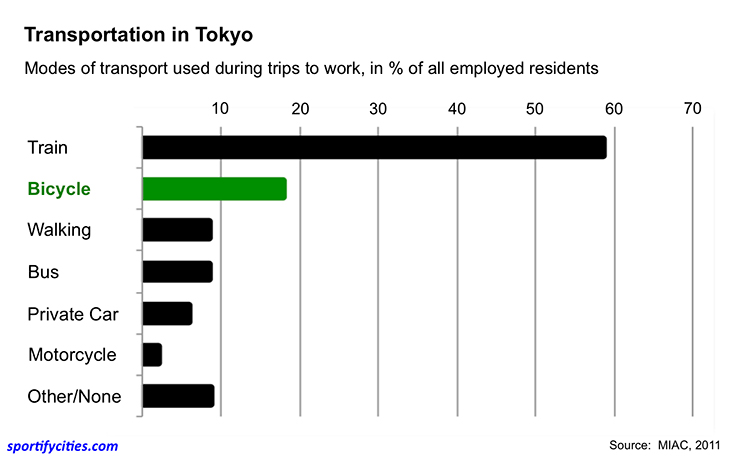 In Tokyo a respectable share of nearly 18% commuters ride a bicycle at some point during their trip to work. Around 65% of Tokyoites who commute to work take public transport system (train and bus) – one of the highest shares in developed countries.

Overall, the omnipresence of public cycling in this Asian megacity indicates that Tokyo, unlike the other top-tier World Cities, has succeeded in integrating this sustainable and healthy means of transport into its urban space and social life. The popularity and socio-cultural acceptance of public cycling among Tokyoites may therefore imply that this megacity offers an exceptionally favourable urban environment in which public cycling has been able to thrive and that other modern high-density cities could draw inspiration from this influential Asian city (for further reading, see the chapters ‘A favourable urban spatial structure’, ‘Bicycle infrastructure – Tokyo’s unconventional path’ and ‘Public cycling in Tokyo and its soft power effects’).