International bicycle advocate groups and contemporary urban planning academics mostly associate the popularity of public cycling with the highly fashionable urban concepts of ‘New Urbanism’ and ‘Compact City’ – which are largely inspired by the urban design of European cities predominantly built during the pre-industrialisation period. The key physical characteristics of these concepts – such as high-urban density and mixed-use neighbourhoods, among others – are believed to be facilitating public cycling due to spatial proximities, that is, bicycle-favourable commuting distances.

The remarkably high numbers of Tokyoites who choose the bicycle as their preferred mode of transportation implies that this megacity offers such favourable urban setting in which public cycling has been able to thrive over the past decades. And in fact, Tokyo’s urban spatial structure resembles a polycentric patchwork of numerous high-density locations, largely symbolizing key elements of the Compact City concept – according to André Sorensen, an Associate Professor of Urban Geography at the University of Toronto Scarborough, Canada, who is an expert on Japanese urban planning.

As Tokyo’s urban planning appears to have facilitated the rise of its public cycling culture, its key urban development characteristics deserve some brief explanation. Much of Tokyo’s present urban landscape originates from both the land-use planning act passed in 1919 and the construction of an extensive urban railway network. In the early 1920s, private railway companies started purchasing large areas of land from the government. The land located along their train lines and around train stations was subsequently sold to housing estate developers and commercial businesses. In order to increase train ridership, that is, to generate greater profits, private railway companies initiated high density and mixed-use developments around railway stations – and as explained above, these are the key elements of a Compact City concept.

Today metro and train stations typically serve as within-close-reach community hubs containing government offices, local supermarkets, restaurants and retail stores. The frequently used expressions for these multi-functional train stations are ‘front door of the town’ and ‘life centre of the town’, indicating their paramount importance to the local community. Moreover, these high-density and multi-faceted centres serve as significant employment locations, which are easily accessible on foot, by bike, or by public transit.

Thanks to the compact city landscape Tokyoites of all walks of life can use their bicycles to reach their destination of choice (a traffic junction in the blue-collar Edogawa ward).

The latest official survey data on commuting destination reveal that, for instance, the workplaces of many bicycle commuters are mostly located within their local ward. Across Tokyo’s 23 Special Wards the percentage of all bicycle commuters who do not need to cross the boundaries of their wards when commuting to work varies between 57.1% (in the Nakano ward) and the remarkable rate of 88.6% (in the large southern Ōta ward). These high proportions of within-ward bicycle commuters clearly indicate that favourable zoning laws – which facilitate key employment sites to be equally distributed across wards – enable many employed Tokyoites to choose bicycles over other transportation modes.

Despite the lack of reliable information on commuting distances, these high levels of intra-wards bicycle commuting may be a likely indicator of relatively short-distance bike rides. Given the land size of these wards, it could be estimated that most bicycle trips to workplace do not exceed 5km. If so, this would resemble the average bicycle commuting distances observed in some European cities located in the Netherlands, Denmark, or Germany – which demonstrate comparable or higher public cycling popularity levels.

In all, it is reasonable to suggest that Tokyo’s high-density urban spatial structure – with its abundance of accessible multi-functional transportation hubs, employment sites and commercial areas – has largely facilitated the rise of the bicycle as a socially-accepted means of transportation among its city-dwellers.

The megacity’s traffic calming street design appears to be another bicycle-facilitating land-use characteristic. Its 23 Special Wards, for instance, were mostly laid out according to the City Building Act and Urban Building Act, dating back to 1919. And despite the ‘Bombing of Tokyo’ between 1942 and 1945, which destroyed large parts of the urban area, the city’s reconstructed urban landscape has kept some characteristic features of traditional Japanese cities. In particular, its expansive grid-street layout consisting of its network of narrow one-way streets and its 3-meters wide alleyways has created a structural condition of traffic calming and street connectivity, making any motorized drive through densely built residential areas somewhat inconvenient or impossible and enabling residents of all ages to ride bicycles on neighbourhood streets without much motorized traffic. 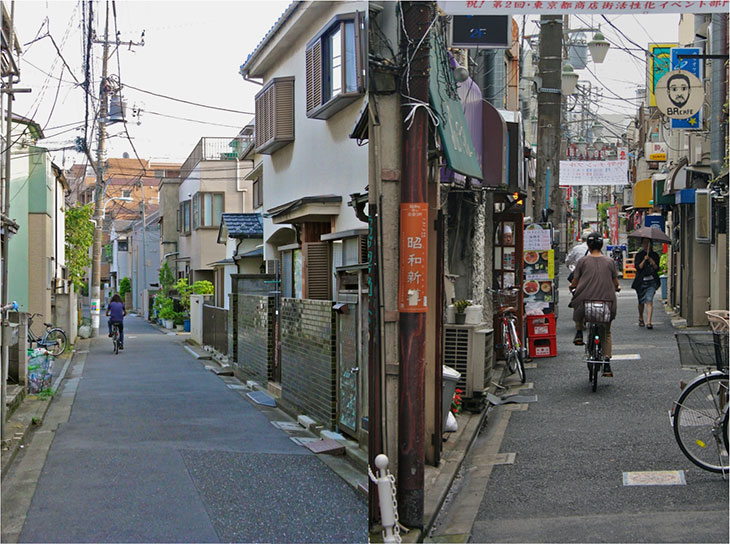 Typical narrow alleyways in residential areas in the western districts of Tokyo, such as Suginami ward and Nakano ward, allow for pleasant bike rides.

Today Tokyo seems to baffle visitors who try to grasp its urban structural forms. And although suggestions are frequently made to improve Japanese cities, they habitually reflect the Western city models. That said, Tokyo’s urban space has also been praised for its chaotic dynamism and the inclusion of its residents. Within its apparent urban chaos there is an actual existing order in Tokyo, which usually escapes most observers.

Over the years, for instance, Tokyoites have created an almost frictionless co-existence of pedestrians, cyclists and motorized vehicles; such a complex use of urban space appears to have worked fairly well on Tokyo’s streets. High levels of equality and orderliness observed in public space could possibly explain this relatively peaceful and organized flow of cyclists and pedestrians on pavements and neighbourhood streets.

Peaceful co-existence of pedestrians, cyclists and motorized vehicles at a train junction in the affluent Shibuya ward.

For older Tokyoites public cycling around their neighbourhoods appears to be more prevalent than walking.

Another plausible explanation for this co-existence of traffic participants in Tokyo could be that public cyclists have mastered some skillful bike riding styles. Given the city’s narrow alleyways and its limited pavement widths, both pedestrians and cyclists are required to be watchful at all times. To avoid collisions on the bi-directionally used pavements high levels of accountability and altruism appear to be demanded from each individual who acts on Tokyo’s streets. For this reason, one may speculate whether Tokyo’s co-existence of traffic participants has resulted in nurturing a more attentive and skillful public cyclist – an active cyclist executing a sense-and-avoid cycling style. By contrast, it is plausible that the construction of segregated bicycle lanes in other parts of the world has fostered a less skillful and more automated type of cyclist – a robotic cyclist; or even a more reckless bike rider – an impulsive cyclist.