This illustrative Sportify Cities report briefly outlines the recent trend of non-docking (or dockless) bicycle-sharing schemes in Beijing. In the light of the booming sharing economy, the stunning success of various bicycle-technology companies, such as Ofo and Mobike, has visibly revived the short- and medium-distance bicycle commuting culture in this capital city. If they prove successful in their global expansion plans, these novel China-based bicycle-sharing schemes could potentially transform the urban living across the world. 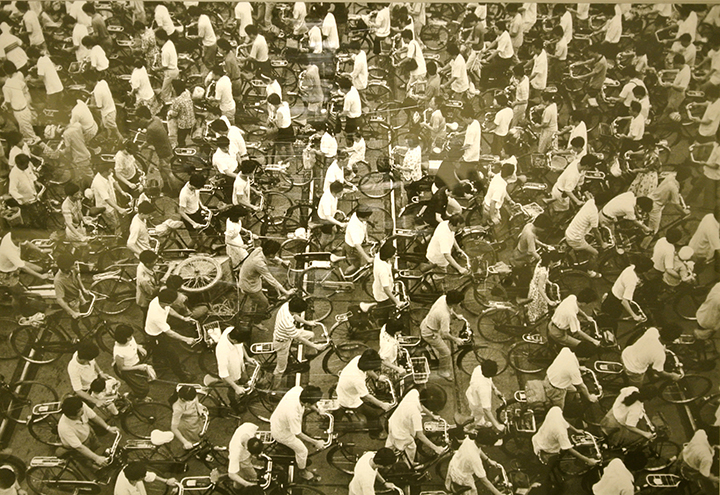 With the implementation of new economic reforms across numerous larger Chinese cities in the 1980s and 1990s, bicycle became the prime transportation mode for blue-collar workers commuting to their newly created workplaces in urban districts. Given that during that period the expansion of Beijing’s rudimentary metro system was still in planning stages and car ownership largely unaffordable, cycling has emerged as the most efficient and most reliable commuting option for Beijingers who did not reside within walking distance to their work location (the original photography by Wang Wenlan; 1991 © Wang Wenlan). 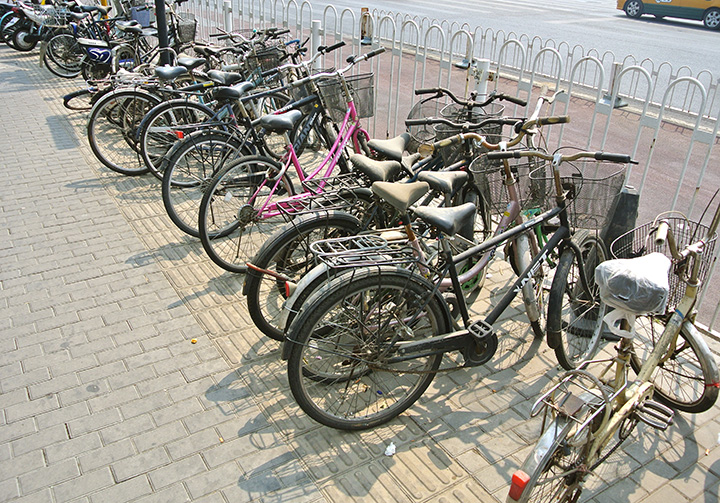 Over the past two decades, however, the share of Beijingers choosing to bike commute has dropped significantly – yet still in double-digit figures. This decline can be largely attributed to the welcomed diversification of available transportation options (i.e., metro, bus, car and scooter) and the lengthier journeys to work due to massive urban expansion. The remaining bike commuters in Beijing have mostly used dark-coloured and rather shabby-looking bikes. 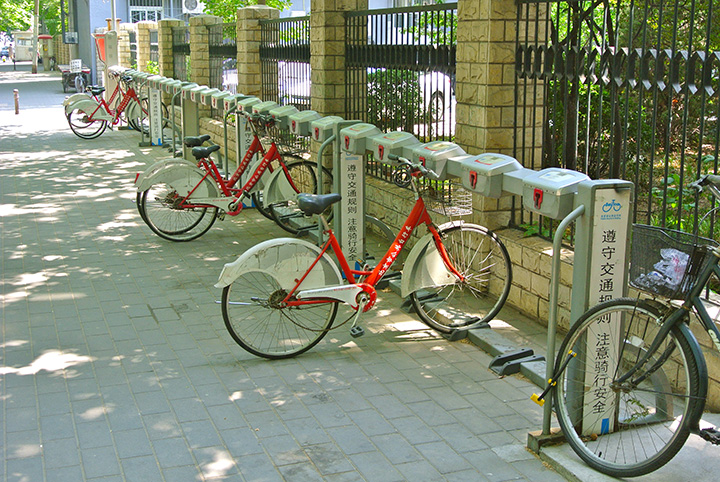 In 2012 a public bicycle sharing system was launched in the inner-city districts (within the Second Ring Road area), emulating the global trend that has been largely triggered by the successful operation of the Velib’ bike-sharing system based in Paris – the largest public bike scheme outside of China. The red-coloured bikes can be rented out at docking stations installed across the inner-city area. They are typically used for short trips, as the charges increase exponentially with borrowing time. This public bicycle sharing scheme, however, appears to be rather unpopular with Beijingers. Furthermore, the rental bikes look somewhat outdated.

A new generation of shared bikes has recently emerged on Beijing’s roads. Numerous Chinese companies have been launching bike-sharing schemes across Chinese cities since 2016 (trials are currently under way in Singapore and Manchester, while further operations are planned in 20 more countries by the end of 2017). Each company is clearly identifiable by the companies’ chosen colours of the small, light, yet solid bikes. There are three main characteristics of the new bike-sharing system that could explain its recent success. First, private companies own and operate the schemes. Second, bicycles can be dropped at any location, that is, urban space-consuming, fixed docking stations are not required anymore. Third, sophisticated smartphone apps enable customers to conveniently (un-) lock the bicycles with their phones.

Various companies have been expanding their non-docking (or dockless) bike-sharing schemes at breathtakingly fast pace, vying for market dominance. So far, Ofo and Mobike have emerged as the undisputed bicycle-sharing market leaders, demonstrating the highest numbers of users and triggering a renaissance of short- and mid-distance bicycle commuting in large parts of Beijing (according to the recent Mobike White Paper, 93 per cent of Mobike bike trips in Beijing are shorter than 5km). 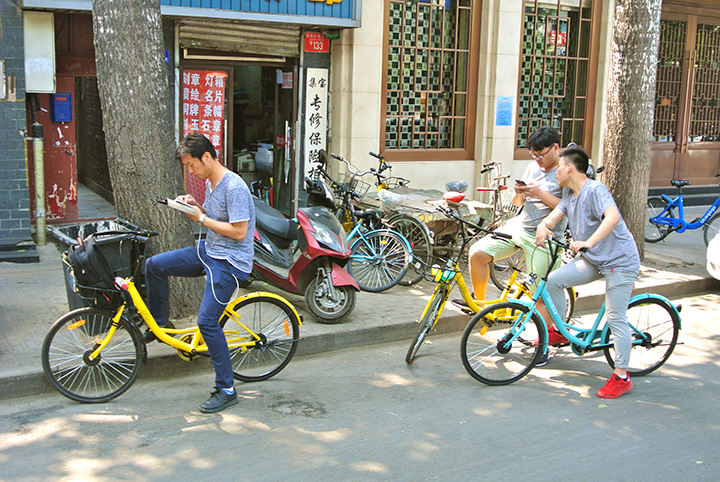 A smart phone is an essential device for users of non-docking bicycles: a photo of the QR bike code (e.g., Mobike) has to be taken in order to be unlocked. And of course, it has become a much-needed tool for acquiring wanted information while bicycle commuting. 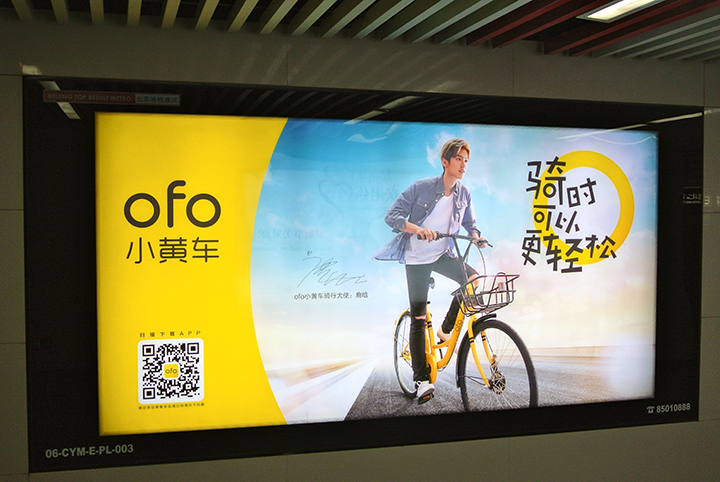 Thanks to the huge investments pouring into the bike-sharing company, the Beijing-based Ofo is enabled to promote its novel and youthful city lifestyle product by securing valuable advertisement space at busy metro stations and popular shopping malls. With its branding Ofo intends to emphasize the flexibility and the cool factor of its shared bikes.

Bike commuters typically cycle on segregated on-road bike lanes, which provide the much-needed separation between cyclists and cars due to the level of traffic congestion. Most main roads within the large inner-city area of Beijing provide cyclists and scooter-riders with such lavishly wide bike lanes.

Due to the rather conflicting traffic light regulations at large road junctions, however, cyclists in Beijing have to be on constant alert while crossing them (despite the green light signal for bikers).

Thanks to the amassed data information on the cycling patterns of their users the companies are able to keep relocating their bicycles to locations with the greatest customer demand at any particular day and time. To put it simply, the companies with the best data acquisition systems and the most efficient bike relocation management generate more revenue.

Larger urban spaces in proximity to busy metro stations are particularly contested, as metro riders have become accustomed to using this new generation of shared bikes to get to locations that are not covered by the metro network.

The integrated wire baskets can be used for various purposes. In general, in China and in much parts of Asia the safety regulations for cyclists are rather relaxed compared to many law-abiding Western countries. 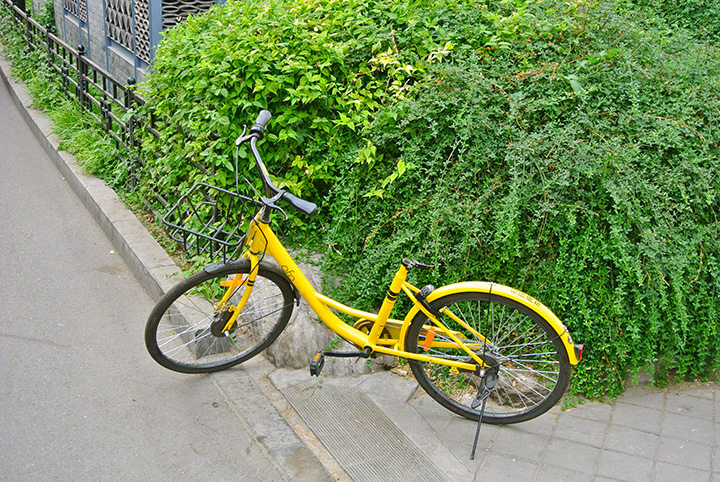 Theft of bicycle parts is not uncommon. One hopes that the Chinese bike companies have considered this aspect when creating their business models. It is also fair to say that the older bicycle share schemes with docking stations in other cities are exposed to the same societal problem. 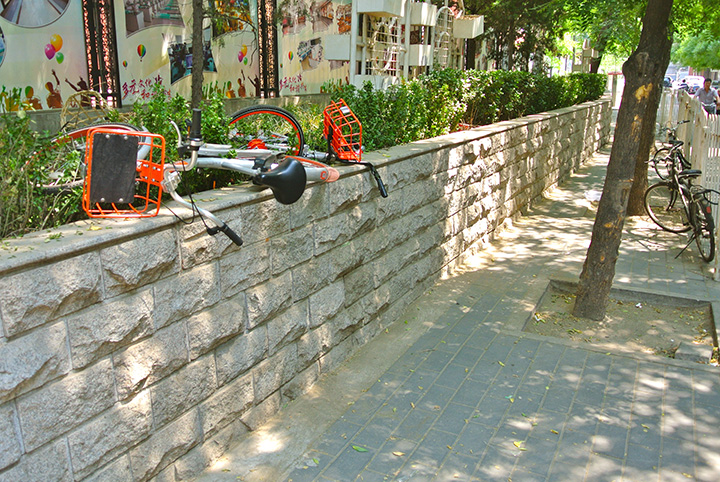 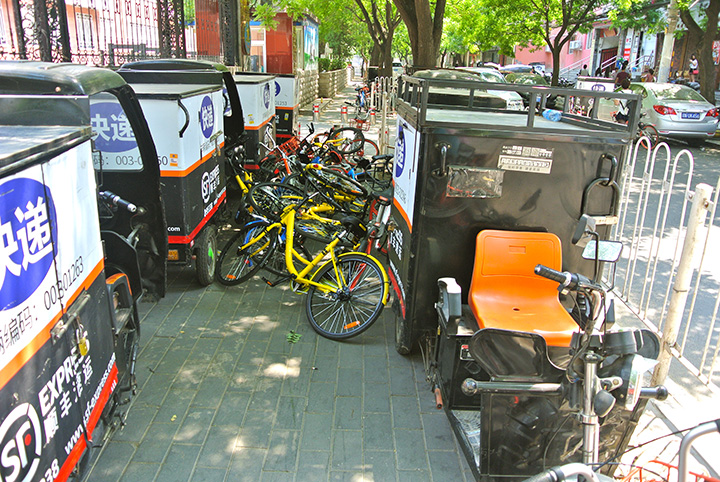 Open warfare for public space! Aside from competing with each other, bicycle-sharing companies also have to compete for the valuable urban space in Beijing. A delivery company created facts on the ground by making space for their own scooters and by vandalising these unwelcome competitors. 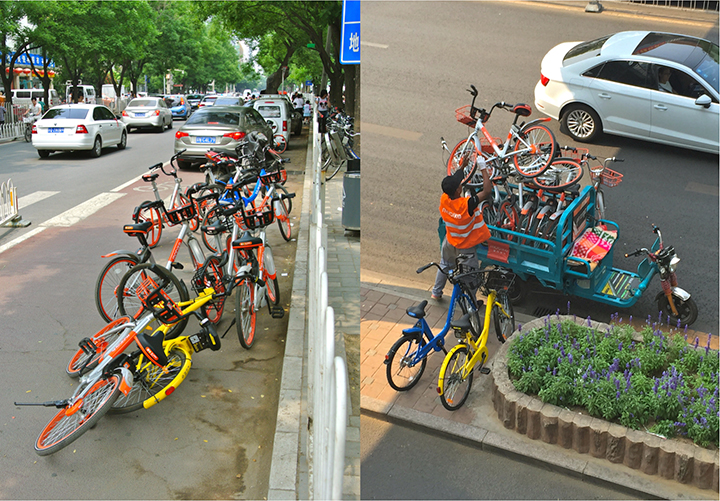 Careless customers occasionally cause minor damages to the bikes by letting them fall on the ground. That said, bike companies themselves are partially to blame for the reoccurring bike damages by allowing their own staff to pile up or even forcefully throw bikes onto their scooters. 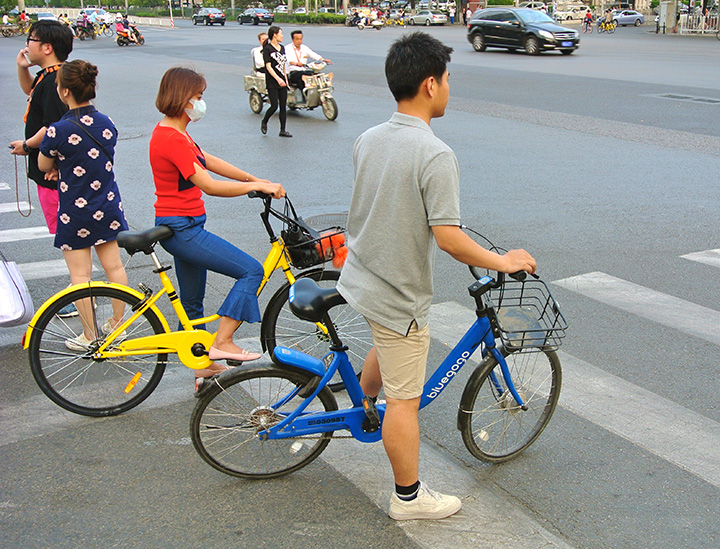 Beijing is one of the worst air pollution offenders in the world (see Chart 3 in the Sportify Cities GUIDELINES & STRATEGIES). Given the city’s high levels of air pollution wearing anti-pollution masks has become a regular feature of cycling in Beijing. This is all the more common during the autumn and winter days when the inversion effect occurs more frequently, resulting in a built-up of harmful air pollutants across the entire urban region. As the popularity of bicycle commuting depends on acceptable air quality levels, the extremely high P2.5 values, in particular (PM2.5 is a key air pollutant that can penetrate deeply into the lung system), could significantly lower the demand for bike sharing during longer smog periods, potentially reducing the revenue of the bike sharing companies.

The new non-docking bicycle schemes have recently led to larger numbers of bicycle commuters on the streets of Beijing and other Chinese cities, increasingly becoming a popular lifestyle choice for local commuters. In the Western media, in particular, articles reviewing this novel bicycle-sharing system appear to be rather critical of this urban trend and to question the companies’ business models. In future, the key bike-sharing companies will also have to adapt to local governments’ regulatory requirements, potentially undermining the expansion of the non-docking bike-sharing schemes.

For the past years Airbnb has been disrupting the hotel industry and Uber has been competing with taxi companies for customers. Could a global wave of disruptive innovation in form of non-docking bicycle-sharing schemes also revolutionise the urban transportation?