Singapore is located in the tropical rainforest climate zone. Due to its high temperatures and high humidity levels this zone does not offer the most suitable environment for outdoor active and sporting lifestyle. While sporty residents in Singapore can easily protect their skin against high UV (ultra violet) radiation, hot and humid conditions as well as torrential rain are non-modifiable factors, creating challenging meteorological environments for local residents all-year-round. By choosing the more pleasant early morning and evening hours for their outdoor sporting activities, however, the city’s residents have adapted to these circumstances. 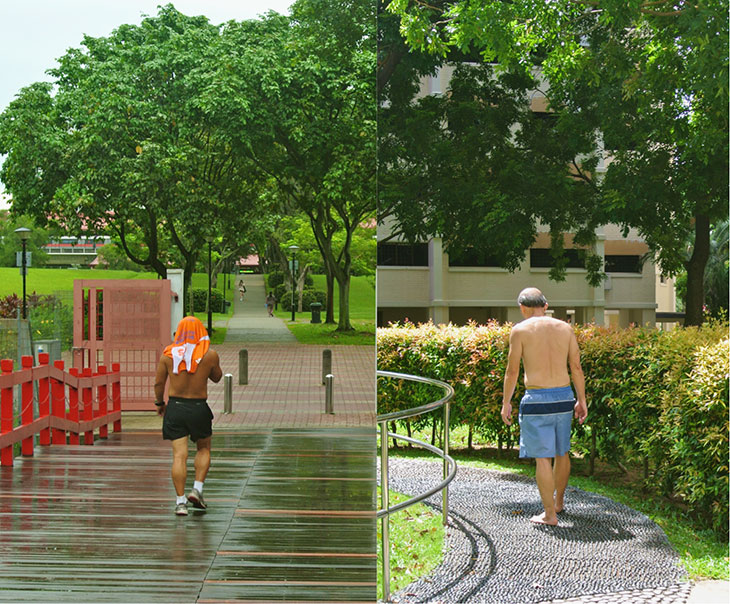 In tropical Singapore sporty residents are exposed to hot and humid conditions all-year round.

To get a clearer picture of Singapore’s temperatures and humidity levels, it is advisable to examine the hour-by-hour meteorological raw data rather than to pay too much attention to conventional climate diagrams – which merely present average values measured over a period of several decades.

The chart below, for instance, illustrates typical air temperatures and humidity levels monitored over the course of a rainless day in Singapore. As the city’s geographic location is under a strong and stable influence of the tropical climate zone, this graph demonstrates fairly reliable pattern observed throughout the year. In the late morning air temperatures usually reach 30°C, while the relative humidity levels are still fairly high, mostly fluctuating between 70% and 80% (even if no rain is reported). During afternoon hours the maximum air temperatures – measured in the shade – exceed 32°C on regular basis. And on a typical dry and sunny day the relative humidity levels remain relatively high, barely dropping below the 50% levels. 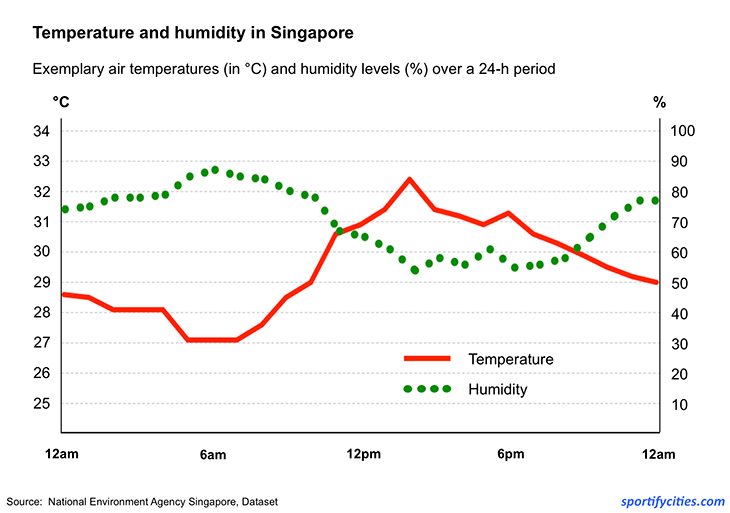 Temperatures and humidity levels on 23th August 2016 in Ang Mo Kio, Singapore. On a typical early morning the air temperatures in Singapore usually exceed 25°C and the humidity levels range between 80 and 90% (on a clear and dry morning); hence, even physical activities performed at modest intensity levels trigger high perspiration rates.

In order to gain a better understanding of the ‘actual’ heat levels in Singapore, other meteorological aspects would also need to be factored into the standard air temperature. For instance, the assessment of the feels like or perceived temperature (also known as apparent temperature) would certainly be more telling, as such calculated temperature takes into account the humidity levels as well as the wind speed. Due to the weighty influence of these two meteorological variables – i.e., wind speed and humidity – on tangible temperature levels, identical air temperatures recorded at various locations around the globe get perceived differently; the levels of humidity are particularly relevant, as more moisture in the air slows the rate of the body skin’s evaporation, resulting in tangibly increased temperatures. The recorded air temperature of 30°C, for example, can be perceived as 30°C in one part of the world, whereas elsewhere it feels more like 40°C. To put the dimension of this heat factor into some perspective, it is therefore worth matching Singapore’s feels like temperatures with the levels perceived in other cities around the world – as illustrated in the chart below. As many people usually struggle to make sense of abstract meteorological numbers, such comparative cities figures can probably offer a real-life reference point. 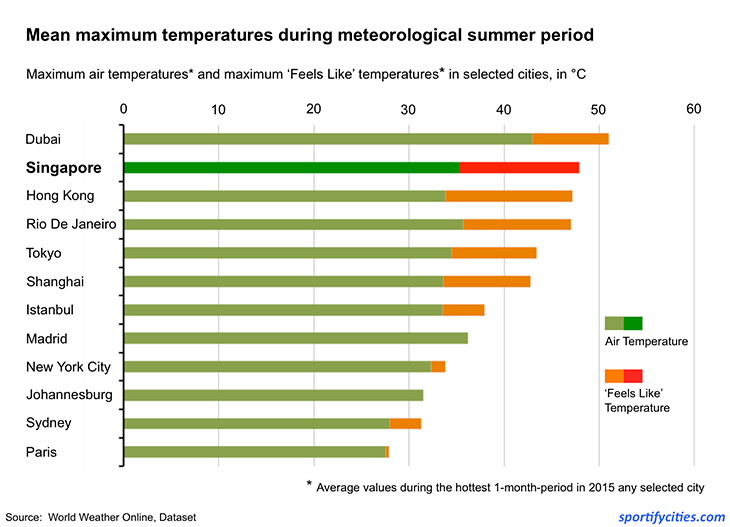 With more than 45°C the average maximum feels like temperature in Singapore is one of the highest among larger cities. Besides, Singapore’s location in the tropical climate zone keeps its temperatures extremely high all-year round, whereas the other cities illustrated in this chart get to experience seasonal changes and much cooler temperatures throughout the year. 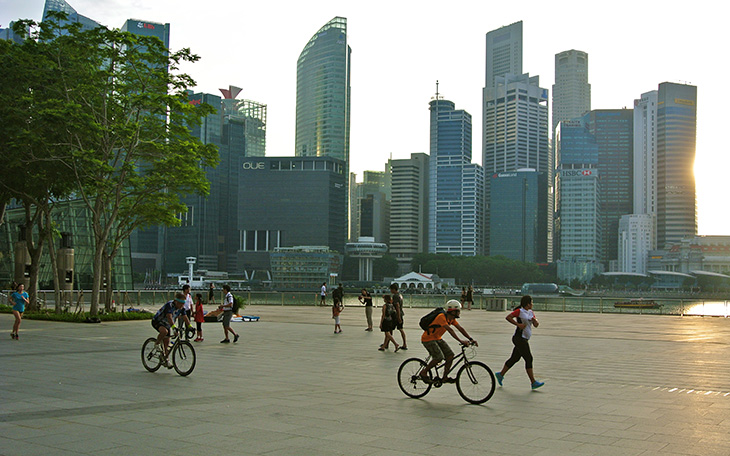 Thanks to low solar radiation intensities and lower feels like temperatures the early evening is the preferred time of the day for sporting activities among local white-collar workers.

After dawn the feels like (or perceived) temperatures in Singapore usually rise very quickly, reaching almost intolerable temperatures of above 40°C by 11am. And over the course of a day the feels like daytime temperatures regularly exceed the 45°C mark – occasionally, the extremely high levels of 50°C are reached. It should also be borne in mind that the effects of solar radiation are yet to be factored in (standard air temperatures are always measured in the shade). According to the Australian Bureau of Meteorology, direct sun exposure on a clear day could add as much as 8°C to the feels like temperatures – that is, on a sunny day in Singapore the already extraordinarily high perceived temperatures could virtually surge to nearly 60°C (!).

With more than 2,000 mm of annual rainfall, Singapore is also one of the wettest large cities in the world (see chart below). Throughout the year, however, much of the precipitation occurs in brief episodes of intensified torrential rain; that is, dry and sunny conditions are rather more common. Only during the main monsoon season, which lasts from November to January, the periods of heavy rain tend to be prolonged, frequently disrupting the routine schedule of outdoor sporting lifestyle enthusiasts. 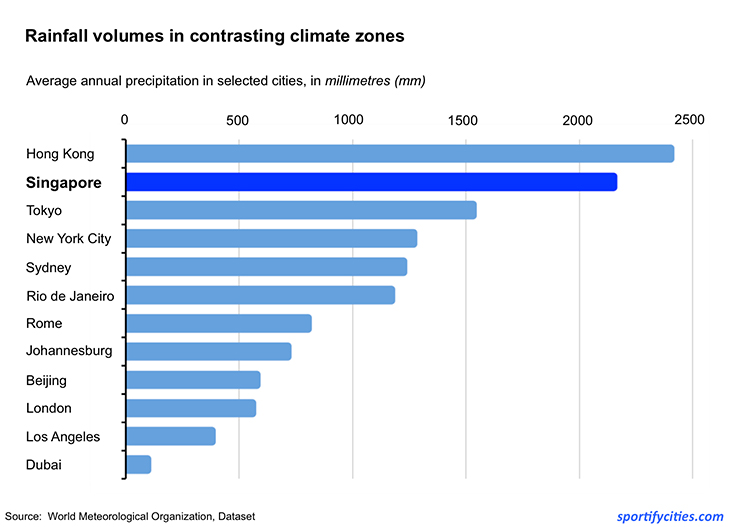 Singapore demonstrates extremely high levels of annual rainfall. However, longer periods of dry weather conditions are rather the norm on a typical day in Singapore (the rain episodes are mostly relatively short, intense and thundery).

Although numerous physical activities are carried out in air-conditioned indoor facilities (such as various fitness courses, squash, table tennis or volleyball), it needs to be pointed out that the 10 most popular sports among Singaporeans are activities that can be performed in outdoor environment, bar gym workout and home exercising – according to the latest national survey. At first glance, the above-mentioned meteorological data on temperature, humidity and rainfall imply that sporty residents endure harsh meteorological conditions when wanting to exercise outdoors in Singapore. And yet such conditions do not seem to deter the city’s residents from participating in active and sporting lifestyle. In order to avoid the hottest temperatures and the highest UV-indices sporty folks simply choose to exercise in the early morning or early evening hours (and conveniently, these periods of time suit most residents with full-time jobs). Besides, Singaporeans typically use a number of conventional strategies for making exercising under hot and humid conditions more comfortable, such as cooling, sufficient fluid intake and adequate clothing.

In all, Singapore’s hot climate appears to be a boon rather than a burden for urban sporting lifestyle. Residents take advantage of the pleasantly warm morning and evening/night temperatures by embedding outdoor physical activities into their everyday life. Hence, its tropical climate will undoubtedly play an important role in creating and eventually promoting a novel sporting lifestyle city image (on this topic, please read the chapter ‘Towards Creating a Distinctive Sporting Lifestyle City Identity’). 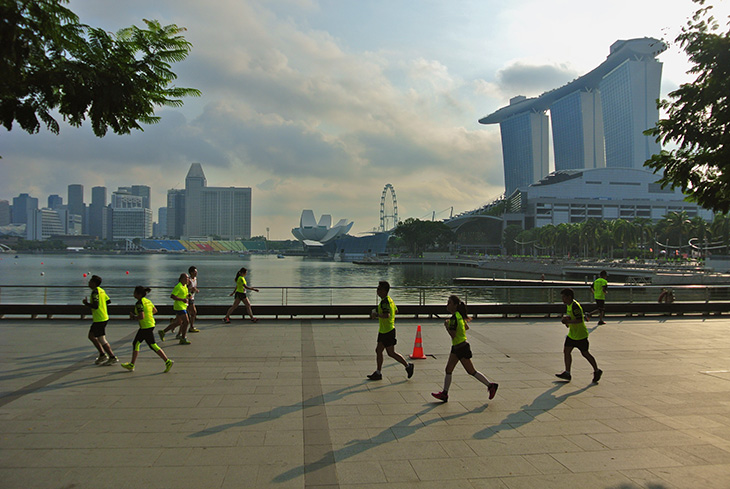 In an attempt to reduce the risk for participants of being exposed to high temperatures and extreme UV indices, the highly popular weekend running events in Singapore usually take place in the early morning hours.

>> READ next chapter “The future of sportification of Singapore”

This report was first published in July 2016; latest update in December 2017.